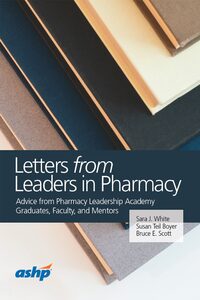 Letters from Leaders in Pharmacy

The latest in ASHP’s Letters series, Letters from Leaders in Pharmacy encompasses 31 concise, personal stories on pharmacy management and leadership from Pharmacy Leadership Academy (PLA) graduates, faculty, and mentors. Each letter written by pharmacist and technician contributors provides aspiring pharmacy leaders and managers with “2–3” PLA leadership learnings and advice based on the individual’s life and work experiences.

Letters from Leaders in Pharmacy: Advice from Pharmacy Leadership Academy Graduates, Faculty, and Mentors shares the inspiring journeys of 31 pharmacy leaders who have completed or been involved with the Pharmacy Leadership Academy—an online, year-long, rigorous program with a comprehensive curriculum designed to enhance the leadership competence of pharmacists and the pharmacy workforce.  The authors share personal and practical stories that describe actual situations that shaped them into the leaders they are today. These letters will allow you to benefit from others’ leadership journeys and lessons learned.

Through their letters, the authors also provide valuable advice on topics such as integrating career and life goals, embracing vulnerability, developing trust within your team, leading with integrity and compassion, defining and living by your leadership values, setting an example as a leader when dealing with crises, and recognizing the value of involvement in professional organizational leadership.

Sara J. White is currently a primary faculty member for the ASHP Education and Research Foundation’s Pharmacy Leadership Academy (PLA) and Leaders Innovation Masters Series (LIMS) programs and a pharmacy leadership coach. She is Director of Pharmacy (Ret.), Stanford University Hospital and Clinics, Palo Alto, CA. She previously served as Associate Director, Director of Clinical Education, and Professor at the University of Kansas Medical Center and School of Pharmacy for 20 years. She graduated from Oregon State University with a Bachelor's degree in Pharmacy. After graduation, White worked at the University of Oregon Medical Center and Emanuel Hospital in Portland for 2 years. She then earned her Master of Science degree at The Ohio State University and completed an ASHP-accredited residency at The Ohio State University Hospitals and Clinics.

Susan Teil Boyer is Senior Consultant, ASHP Consulting and Past Board Member, ASHP. She serves as a primary faculty for the PLA. She is the former Executive Director of the Washington State Board of Pharmacy. She earned her MS in Pharmacy from The Ohio State University and her BS from the University of Washington. She has more than 30 years of experience as a pharmacy administrator, state board of pharmacy executive, consultant, residency surveyor, and educator.

Ms. Boyer has consulting experience with the Washington State Health Information Exchange and with the Center for Pharmacy Practice Accreditation, and she has served as an ASHP lead surveyor for pharmacy residency programs for 5 years. Susan was the Executive Director of the Washington State Board of Pharmacy from 2009 to 2012, and prior to that served for over 20 years as Vice President and Director of Pharmacy Services for MultiCare Health System in Tacoma, Washington.

Bruce E. Scott is Healthcare Executive (Ret.), EnvisionPharmacies, and a former faculty for the PLA. He has served in the leadership of major organizations, including Accredo Infusion Services, McKesson Medication Management, and Allina Hospitals & Clinics. He earned a Bachelor of Science in Pharmacy from the University of Wisconsin School of Pharmacy. He received a Master of Science degree in Pharmacy Administration from the University of Kansas where he also completed an ASHP-accredited pharmacy residency.

Mr. Scott is a Past-President of both the American Society of Health-System Pharmacists and the Minnesota Society of Health-System Pharmacists. He is a board member of the Utilization Review Accreditation Commission and the Board of Visitors at the University of Wisconsin School of Pharmacy. He has also served on the University of Minnesota College of Pharmacy Deans’ Board of Advisors. He has received numerous awards for his service to the profession, including ASHP's Harvey A.K. Whitney Lecture Award, the Hugh F. Kabat Award for Service to Pharmacy in Minnesota, the Harold N. Godwin Leadership Legacy Award, and the John Webb Lecture Award.