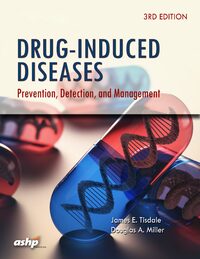 Protect Your Patients: A Definitive Guide to Drug-Induced Disease

Now in its third edition, this comprehensive guide provides a detailed overview of diseases that result from drug therapy, arming healthcare professionals with critical knowledge to protect the health and welfare of their patients.

A drug-induced disease is the unintended effect of a drug, which results in mortality or morbidity with symptoms sufficient to prompt a patient to seek medical attention and/or require hospitalization. This book, now a modern classic, examines these unintended effects and creates a knowledge base of potentially causal drugs that must be considered in medication monitoring activities.

Now in its third edition, this essential and comprehensive resource provides a detailed analysis of how to identify, prevent, and manage drug-induced diseases. Edited by James E. Tisdale and Douglas A. Miller, with contributions from experts distinguished in their respective specialties, Drug-Induced Diseases is organized logically and is easy to use for pharmacists, physicians, nurses, and pharmacy students alike.

Dr. Tisdale’s research interests are in the area of cardiovascular pharmacotherapy, focusing on mechanisms, risk factors, and management of drug-induced arrhythmias, and drug therapy for prevention and treatment of atrial fibrillation. His research has resulted in the publication of nearly 50 journal articles, 6 book chapters, and 40 research abstracts in addition to his co-editorship of Drug-Induced Diseases: Prevention, Detection, and Management.