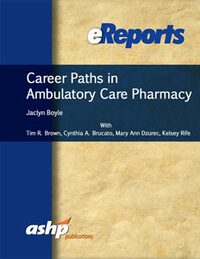 Career Paths in Ambulatory Care Pharmacy will help any pharmacist or student understand the nuances of practicing in the field. This ASHP eReport fosters true understanding of the experience of training as a resident, starting a career as a new practitioner, and even what it’s like to be well-established and at the forefront of ambulatory pharmacy care. For anyone considering a career in ambulatory care pharmacy, this eReport offers clear perspectives and valuable guidance.

From the challenge of conducting research as a resident in a new practice site, to balancing time as a seasoned clinician committed to patient care, teaching, and community outreach, Career Paths in Ambulatory Care Pharmacy offers first-hand accounts that will help any pharmacist or student understand the nuances of practicing in this growing field. By providing a window into the lives of practitioners at all stages of career development in ambulatory care, this ASHP eReport fosters true understanding of what it’s like to be a resident, to start a career as a new practitioner, and even what it’s like to be well-established and at the forefront of ambulatory pharmacy care.

Jaclyn Boyle is an Assistant Professor for Community Pharmacy Innovation in the Department of Pharmacy Practice at Northeast Ohio Medical University (NEOMED). She graduated from NEOMED and completed a PGY1 pharmacy practice residency and PGY2 internal medicine/academia residency at University Hospitals Geauga Medical Center in Chardon, OH. Prior to receiving her PharmD, Boyle received a Master of Science in Pharmacology and Bachelor of Science in Pharmaceutical Sciences from The Ohio State University. She is currently enrolled in a Master of Business Administration program at The University of Findlay. Her responsibilities at NEOMED include on-campus teaching, coordination of several skills-based courses and residency preparation activities, and other academic service commitments.

Dr. Boyle currently serves ASHP on the Small and Rural Hospitals Section Advisory Group, acts as the ASHP-SSHP Mentor for NEOMED’s SSHP chapter, and has developed and edited a new series of eReports on Career Paths in Pharmacy. She also is the Division Director for Professional Affairs for the Ohio Society of Health-System Pharmacists, is acting Chair of the Residency Expansion Committee, and is assuming a Co-Chair position for the Ohio PPMI Task Force in 2015. Boyle also is actively involved in leadership roles within the American Association of Colleges of Pharmacy and Lambda Kappa Sigma. Her practice site encompasses delivering services to the NEOMED health plan and developing new and innovative ambulatory services in an outpatient primary care clinic.

Tim R. Brown is employed by Akron General Medical Center’s Department of Pharmacy and acts as a Pharmacotherapy Specialist in the Family Medicine Residency Program. He received his Doctorate from Campbell University School of Pharmacy with residency training at the Medical College of Virginia. His current practice is based within a Family Medicine residency program where he also acts as a preceptor for pharmacy and medical students from across the country and is a Professor at the Northeast Ohio Medical University.

Recently, Brown was awarded the Distinguished Service Award in Ambulatory Care by American Society of Health-System Pharmacists. He has also received the Golden Apple Teacher of the Year Award multiple times from the Department of Family Medicine and was awarded the William C. Kelly Safety Leadership Award by the Ohio Hospital Association. Dr. Brown serves as the President Emeritus of the BOD for Project Learn of Summit County. He has been active with the creation of the Pharmacy Practice Model Initiative by attending the inaugural session and the subsequent Ambulatory Care Summit. Dr. Brown was the Chair of the Specialty Council on Ambulatory Care Pharmacy, which represents the BCACP for the Board of Pharmacy Specialties. Brown is also the co-editor of the two books designed to help others build their practice model in an ambulatory care setting, as well as co-creator of an outpatient intervention tracking application called PACT. In addition, he is a Past President of the Ohio Society Health-System Pharmacists and Past Chair of the Section of Ambulatory Care Practitioners of ASHP. Dr. Brown was awarded Fellow status by the American Society of Health-System Pharmacists in 2012 and now serves on the Board of Directors of ASHP.

Cynthia A. Brucato received her Doctorate of Pharmacy from Ohio Northern University in 2012. She completed her PGY1 pharmacy residency with St. Rita's Medical Center in Lima, OH. She then completed her PGY2 ambulatory care residency at Louis Stokes Cleveland Department of Veterans Affairs Medical Centers in Cleveland, OH. She is also a Board Certified Ambulatory Care Pharmacist.

Following her second year residency, Dr. Brucato accepted a position as a Clinical Pharmacist with Summa Health System in the Cardiovascular Clinic at Summa Akron City Hospital. She works in the anticoagulation clinic and completes inpatient warfarin management. A priority of the clinic is to focus on the transitions from hospital to home to ensure continuity in patient care. In addition to warfarin management, she also provides education and monitoring for patients on the target specific oral anticoagulants. Brucato serves as a preceptor for the Summa Medical residents and PGY1 pharmacy residents and pharmacy students from Ohio Northern University and Northeast Ohio Medical University.

Mary Ann Dzurec is an Ambulatory Pharmacy Specialist, MetroHealth, and Clinical Professor, Northeast Ohio Medical University in Rootstown, OH. She earned both her Doctor of Pharmacy and her Bachelor in Pharmacy degrees from The Ohio State University. Her responsibilities at MetroHealth include providing optimal medication management under collaborative agreements with physicians as well as precepting the PGY1 pharmacy practice residency and students. At Northeast Ohio Medical University, Dr. Dzurec served as a former Assistant Professor of Pharmacy Practice and is current Clinical Faculty with a focus on patient-directed motivational behavior change and endocrine, cardiology, and pulmonary therapeutics. She is a Board Certified Ambulatory Care Specialist.

Kelsey Rife earned her Doctor of Pharmacy degree from Ohio Northern University in May 2012. Upon graduation, she completed both her PGY1 pharmacy practice and PGY2 ambulatory care residencies at Louis Stokes Cleveland VA Medical Center (VAMC). She earned her Board Certification in Ambulatory Care in 2014. Dr. Rife currently works as a Hepatitis C Clinical Pharmacist at the Louis Stokes VAMC. In addition to seeing patients at the Cleveland VAMC, Dr. Rife utilizes telemedicine to remotely educate and treat hepatitis C patients at the other VA facilities in Ohio. She also serves as a preceptor for pharmacy residents and students.