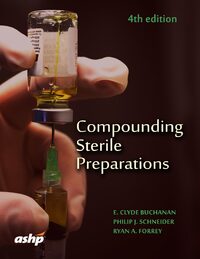 The newest edition of this publication now includes:

Since the last edition published in 2008, much has changed in the world of compounding. Don’t miss out on the latest updated information in this field.

E. Clyde Buchanan (Ret.) is a pharmacy consultant and recognized expert on compounding sterile preparations and pharmacy planning, budgeting, and operations. At Emory Healthcare in Atlanta, he was Senior Director of Pharmaceutical Services. Prior to Emory, he held pharmacy leadership positions at Duke University Medical Center and St. John’s Hospital in Springfield IL. Mr. Buchanan received his BS in Pharmacy from the University of North Carolina and MS and residency training from The Ohio State University.

Buchanan has served the American Society of Health-System Pharmacists as Chairman of SIG on Administrative Practice; Vice Chair of the Council on Legal and Public Affairs; member of the House of Delegates; and several committees and task forces. Mr. Buchanan has edited and authored four books on sterile compounding and numerous manuscripts and book chapters. He has been a frequent speaker for state and national conferences on USP Chapter <797>.

Philip J. Schneider is Clinical Professor and Associate Dean for Academic and Professional Affairs for the University of Arizona, College of Pharmacy. In this position, he provides oversight, development, and administration of educational initiatives including teaching, service, and scholarship activities at the Phoenix Biomedical Campus. Schneider received a BS in Pharmacy from the University of Wisconsin, MS in Hospital Pharmacy from The Ohio State University, and a Certificate of Residency from The Ohio State University Hospitals.

During his 38 years of professional and academic service, Mr. Schneider has published more than 170 articles and abstracts in professional and scientific journals and 38 book chapters, edited seven books, and given more than 500 contributed or invited presentations in 22 countries and the US.

Dr. Forrey is a pharmacy leader, speaker, and author; he is recognized nationally and internationally for expertise in pharmacy practice leadership. He has had nearly 15 years of practice in an academic oncology hospital with tremendous growth and innovation in care delivery models as well as automation implementation. Forrey has a strong focus on education and training of oncology and pharmacy leadership residents.