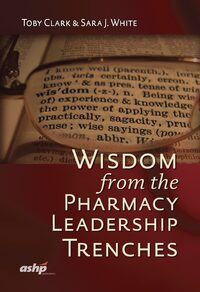 Wisdom from the Pharmacy Leadership Trenches

Wisdom from the Pharmacy Leadership Trenches is a source of “real life” advice on all aspects of pharmacy leadership. Written by two of pharmacy’s top leadership coaches, Toby Clark and Sara J. White, its guidance is based on their decades of experience mentoring students, residents, and assistant directors, as well as insights gained from many discussions they had with colleagues who called seeking advice.

You’ll want to turn to this “mentor” over and over again throughout your career.

As a current or future director, you’ve got the technical skills and knowledge you need to excel; as a resident, you know where to acquire them. But the wisdom and leadership abilities vital for success as a leader in today’s high-pressured environment can’t be learned from a textbook or in a classroom.

To fill this gap, ASHP has developed a unique publication: Wisdom from the Pharmacy Leadership Trenches. Like having a mentor at your fingertips 24/7, it is a source of “real life” advice on all aspects of pharmacy leadership.

Written by two of pharmacy’s top leadership coaches, Toby Clark and Sara J. White, its guidance is based on their decades of experience mentoring students, residents, and assistant directors, as well as insights gained from many discussions they had with colleagues who called seeking advice.

Inspirational and thought provoking, you’ll want to turn to this “mentor” over and over again throughout your career.

Mr. Clark was a long-time member of the American Society of Health-System Pharmacists, the South Carolina Society of Health-System Pharmacists, and the American Institute of the History of Pharmacy. He was a past officer of the Southeastern Michigan Society of Hospital Pharmacists and the Society of Hospital Pharmacists of Greater Kansas City. Mr. Clark had served two terms as Chair of the ASHP Practice Management Group (now Section of Practice Management) and had participated as a delegate to the ASHP House of Delegates for the states of Texas, Missouri, and Michigan. In 1998, he was recognized as a Fellow of ASHP.

He was a past North American Vice President and Treasurer of the Section of Hospital Pharmacy of the International Pharmacy Federation (FIP). In 2003, Clark was awarded the Donald E. Francke Medal for his contributions to international pharmacy and in 2013 awarded an elected Fellowship in the FIP.  An avid medical/pharmacy historian, he was a member of the Dean Robert Wilson Medical History Society of Charleston and President of the MUSC Waring Library Society.  Mr. Clark was a Past Chair of the University Health-System Consortium Pharmacy Council and Executive Committee and was a founding member of both the Oncology Section of the Board of Pharmaceutical Specialties and the Novation Pharmacy Executive Committee. In 2012, he was awarded the John W. Webb Lecture Award and Visiting Professor at Northeastern University, School of Pharmacy. In 2007, he was recognized for Distinguished Service by the ASHP Section of Informatics and again in 2013 received the Distinguished Service Award by the ASHP Section of Practice Managers.

Toby’s professional interests focused on the safety, quality, and productivity of the medication system; training pharmacy residents; and the development of leaders. A former lecturer on topics of pharmacy/medication system informatics and computerized prescriber order entry, he spearheaded formation of the ASHP Section on Informatics and founded the group's POE/CPOE listserv, now operated by ASHP. He was a consultant to scores of hospitals in the United States.

Mr. Clark passed away unexpectedly in the fall of 2015.

White served as Associate Director, Director of Clinical Education, and Professor at the University of Kansas Medical Center and School of Pharmacy for 20 years. She was the Director of Pharmacy at Stanford Hospital and Clinics and Clinical Professor at the University of California, San Francisco, for 11 years before taking an early retirement. She has served as an ASHP Foundation Scholar-in-Residence. She is in her third 3-year term as a corporate board member for Omnicell.

In this book, Toby Clark and Sara White share some of the pharmacy management insights that they have accumulated over their combined pharmacy practice experience of almost 100 years. Although many of these insights might be applicable to a broader audience, this publication is clearly directed toward hospital pharmacy managers and those who are planning to pursue such a career path. As the authors suggest, this is not a book that should be read in a single sitting. Each chapter focuses on a particular skill or attribute that is important for a pharmacy manager to have or to acquire. After a chapter has been read, the reader will want to reflect upon the material presented and then ask themselves if they should make changes to enhance their own departmental operations or management skills. Taking time for reflection and planning how improvements could be made, before moving on to the next chapter, is advised.

The authors clearly have a sense of humour and a willingness to take an unconventional approach. They have included at least one chapter for each letter of the alphabet (e.g., Accountability, Brand, Coaching, Delegation), which keeps the reader guessing what the next chapter title will be, especially when the next letter is X. Personally, I had never heard the word “Xystering,” but the authors slipped in that chapter title very nicely. Concepts such as delegation, branding, coaching, and communication are pulled together in this book and applied specifically to the work environment in which pharmacy mangers operate. My only significant criticism of this book is the absence of references, even though the material is often drawn from the work of others, such as Kotter’s change model and Peter’s personal branding publications, 2 which readers might want to access for further reading. This book is recommended for pharmacists who are contemplating a future career in pharmacy management, as well as those who are already in a pharmacy management position. The latter may mistakenly think there will be nothing new to learn by reading this book, but if they take the time to read and apply the insights provided by the authors, they will almost certainly be proven wrong.