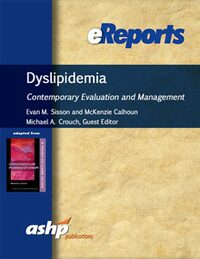 Like all ASHP eReports, this is a brief and straightforward presentation of what you need to know about dyslipidemia treatment, the new guidelines, and where you can turn for deeper understanding of the context. Dyslipidemia: Contemporary Evaluation and Management addresses pathophysiology, clinical presentation, diagnosis, and disease classification, general treatment principles, non-pharmacological treatments, pharmacotherapy, monitoring, clinical controversies, and future treatment, references, and web resources.

After much anticipation, new dyslipidemia guidelines have been published by the American College of Cardiology (ACC) and American Heart Association (AHA). The guidelines are a major shift from specific lipid goals to a focus on risk reduction. All pharmacists will need to be familiar with these guidelines in order to provide optimal patient care.

Like all ASHP eReports, this is a brief and straightforward presentation of what you need to know about dyslipidemia treatment, the new guidelines, and where you can turn for deeper understanding of the context. Dyslipidemia: Contemporary Evaluation and Management addresses pathophysiology, clinical presentation, diagnosis, and disease classification, general treatment principles, non-pharmacological treatments, pharmacotherapy, monitoring, clinical controversies, and future treatment, references, and web resources.

Evan M. Sisson is Professor, Department of Pharmacotherapy & Outcomes Science, VCU School of Pharmacy in Richmond, VA. His current practice sites include an inner-city free clinic where he manages drug therapy under a collaborative practice agreement with the medical director. Prior to joining the faculty at VCU, Dr. Sisson worked in the interdisciplinary diabetes and lipid clinics at the Richmond Veterans Affairs Medical Center. Dr. Sisson is a Certified Diabetes Educator and a past member of the Board of Directors for the American Association of Diabetes Educators.

Sisson is a frequent author on the topics of drug therapy for dyslipidemia and diabetes. Two recent book chapters include Pharmacotherapy for Glucose Management and Pharmacotherapy: Dyslipidemia and Hypertension in Persons with Diabetes in the 3rd edition of AADE’s Art and Science of Diabetes Self-Management Education. Additionally, he authored the 5th edition of AADE’s Quick Guide to Medications.

McKenzie Calhoun is an Assistant Professor in the Bill Gatton College of Pharmacy's Department of Pharmacy Practice at East Tennessee State University (ETSU). Dr. Calhoun also holds an adjunct faculty appointment in the Department of Family Medicine at James H. Quillen College of Medicine. She maintains a clinical pharmacy practice with the ETSU Family Physicians of Kingsport. She is faculty advisor for the ETSU chapter of the APhA Academy of Student Pharmacists and a member of TPA, APhA, ACCP, STFM, Kappa Psi, and Phi Lambda Sigma. Calhoun earned her Doctor of Pharmacy degree at ETSU Gatton College of Pharmacy; she completed a PGY1 residency in pharmacy practice at Veterans Affairs Tennessee Valley HealthcareSystem in Nashville, TN, and a PGY2 residency in ambulatory care at ETSU Gatton College of Pharmacy.

Michael A. Crouch serves as the Fred E. McWhorter Dean and Professor at Samford University’s McWhorter School of Pharmacy. His education includes a Bachelor of Science in Pharmacy from the University of North Carolina followed by a first-year pharmacy residency at Wake Forest University Baptist Medical Center. Crouch also received a Doctor of Pharmacy from the Medical University of South Carolina where he completed a second-year residency focused on cardiology. Before joining Samford in 2014, he served on the faculty of Virginia Commonwealth University (Assistant then Associate Professor of Pharmacy and Medicine), South University (Chair and Professor), and East Tennessee State University (Associate Dean for Academic Affairs then Executive Associate Dean).

Dr. Crouch was the recipient of the Excellence in Teaching Award, 2001; Excellence in Teaching Award, 2000; and Teacher of the Year Award, 1998. Crouch has served as editor for two books: Cardiovascular Pharmacotherapy: A Point-of-Care Guide and Securing and Excelling in a Pharmacy Residency. He presently serves on the Birmingham Veterans Affairs Quality Scholars Advisory Committee, Albert Schweitzer of Alabama Advisory Council, Tuscaloosa Research and Education Advancement Board, and Paraguay Baptist Medical Center Foundation Board.