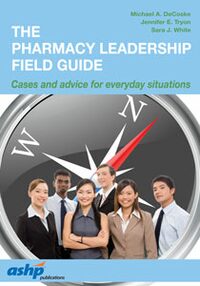 Cases and Advice for Everyday Situations

The Pharmacy Leadership Field Guide: Cases and Advice for Everyday Situations can be your personal “in-print mentor” to introduce you to leadership concepts and situations and broaden your understanding. This Field Guide focuses on leadership in everyday pharmacy practice by employing a case-based approach. This book on leadership was written to provide students and new practitioners with a useful resource as they begin their careers.

As a pharmacist, you face leadership challenges every day whether you are a student, new practitioner, or seasoned veteran. Many times, there are no easy solutions, and you could use some advice or guidance, or even a reality check. Now, The Pharmacy Leadership Field Guide: Cases and Advice for Everyday Situations can be your personal "in-print mentor" to introduce you to leadership concepts and situations, offer real world advice, and provide professional insights to guide you along the way.

This Field Guide focuses on leadership in everyday pharmacy practice by employing a case-based approach. While pharmacists receive exceptional didactic clinical training, leadership skills are another crucial skill set necessary for success. Each chapter is written from the perspective of a veteran mentor and a new practitioner, both selected from various practice settings.

Led by the editorial team of Michael A. DeCoske, Jennifer E. Tryon, and Sara J. White, you will hear from 19 contributors offering pearls of leadership wisdom for you to reference when needed and pass along to others.

Michael A. DeCoske currently serves as the Associate Chief Pharmacy Officer for Ambulatory Services at Duke University Hospital in Durham, NC. He also serves as a Residency Advisor for PGY1 residents in the 24-month health-system pharmacy administration residency program. Previously, Dr. DeCoske served as Coordinator of Pharmacy Administrative Services at Duke University Hospital. Prior to Duke, he completed a PGY1 and health-system pharmacy administration (PGY2) residency at the Medical University of South Carolina in Charleston, SC. He completed his Doctor of Pharmacy degree at Duquesne University in Pittsburgh, PA.

Dr. DeCoske has served various roles within the ASHP New Practitioners Forum as a member of the Public Affairs and Advocacy and Membership and Outreach Advisory Groups as well as Vice-Chair of the ASHP New Practitioners Forum Executive Committee. Most recently, he served as the Chair of the 2009-2010 ASHP New Practitioners Forum Executive Committee. He also represented the Forum as a delegate at the 2009 ASHP House of Delegates in Chicago, IL. Dr. DeCoske is a member of the ASHP Section of Pharmacy Practice Managers Leadership Development Section Advisory Group, the University Health System Consortium Ambulatory Pharmacy Council, the North Carolina Association of Pharmacists, and the International Pharmaceutical Federation. He also holds distinction as a Board Certified Pharmacotherapy Specialist.

Jennifer E. Tryon is the Assistant Director of Pharmacy at Southwest Washington Medical Center where she oversees inpatient operations, both clinical and distribution areas, the anticoagulation clinic, the infusion pharmacy services, and the hospice program. She also participates in the SWMC residency program, serving as a primary preceptor. For the past 3½ years, she has been the Assistant Director of Pharmacy at Oregon Health and Sciences University, with responsibility for the inpatient central and decentral pharmacy operations, the Emergency Department, medication safety, and regulatory and quality compliance. Tryon received her Doctor of Pharmacy from the University of Iowa and her Master's of Science degree from the University of Wisconsin.

Dr. Tryon is active in state and national organizations, including serving as a delegate for the state of Oregon at the ASHP House of Delegates. She is the 2010 President-Elect of the Oregon Society. She is the Past Chair of the ASHP Section Advisory Group on Manager Development, a member of the Committee on Nominations, and a member of the Search and Screen Committee for the ASHP Executive Vice President and Chief Executive Officer.

Sara J. White is currently a primary faculty member for the ASHP Education and Research Foundation’s Pharmacy Leadership Academy and Leaders Innovation Masters Series programs and a pharmacy leadership coach. She served as Associate Director, Director of Clinical Education, and Professor at the University of Kansas Medical Center and School of Pharmacy for 20 years. She was the Director of Pharmacy at Stanford Hospital and Clinics and Clinical Professor at the University of California, San Francisco, for 11 years before taking an early retirement. White has served as an ASHP Foundation Scholar-in-Residence. She is in her third 3-year term as a corporate board member for Omnicell. Ms. White graduated from Oregon State University with a Bachelor's degree in Pharmacy. After graduation, she worked at the University of Oregon Medical Center and Emanuel Hospital in Portland for 2 years. She then earned her Master of Science degree at The Ohio State University and completed an ASHP-accredited residency at The Ohio State University Hospitals and Clinics.

"This book is a must read for anyone interested in leadership. The practical cases can be easily applied to daily life for both experienced student leaders and those just beginning to think about leadership opportunities."

“I had such a great time reading this book! It's a great read for students who are interested in pharmacy leadership. Developing leadership skills is something students and residents can start early in their career to help them succeed. This guide is easy to read in case format.”

The stated purpose of this text is “to present pertinent leadership concepts using real-life cases that apply to pharmacy students, residents and new practitioners.” The text consists of 9 chapters with titles such as “Becoming a Leader,” “Leading Yourself,” and “Working Efficiently.” Each chapter is further broken down into subtopics that deal with contemporary leadership issues. Each subtopic is addressed through the use of a case in which the protagonist, a new practitioner, finds him- or herself in a challenging situation, with each scenario being set up to allow discussion of certain leadership and management skills. Advice on how to handle the challenges presented in each case is provided first by one of several veteran mentors and then by one of a number of new pharmacy leaders at an earlier stage of their career development. The text also includes additional material at the end of each chapter, such as recommended reading material, self-assessment exercises, and even a few crossword puzzles and word games based on material covered in the chapter.

This book contains a lot of accumulated leadership wisdom. It will undoubtedly be helpful to new practitioners who are interested in pursuing a leadership and/or management career path. The case studies are realistic, and, as is typically the case in the real world, each case usually requires application of a number of different leadership skills. This is both a strength and a weakness of the text. After a few cases, the advice from the mentor and the new leader begins to have a repetitive ring. While such repetition may help to reinforce the principles being presented, readers may find themselves skipping over advice that seems to add little to what has already been said about similar issues in previous cases. Each case also has a section comparing what the protagonist “might be thinking” and what he or she “might be reasoning,” a distinction that I found a bit confusing. I expected that the “might be thinking” component would identify the emotional response that a new practitioner was experiencing, whereas the “might be reasoning” part would address a reasoned response after some thought had been given to the issue, but there seemed to be a lack of consistency in terms of what appeared under these 2 headings. After a few cases, I found myself skipping over these sections.

Although there is a lot of good leadership advice in this book, the format in which it is presented makes it a bit of a challenge to stay engaged as a reader.

Dr. Hall is also an Associate Editor with the CJHP.