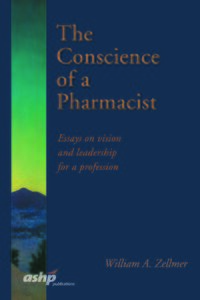 The Conscience of a Pharmacist

Essays on Vision and Leadership for a Profession

The Conscience of a Pharmacist: Essays on Vision and Leadership for a Profession is a collection of editorials written by William A. Zellmer. It offers insightful, analytical commentary on topics of contemporary interest to pharmacists and pharmacy students.

At a point in an individual's journey as a pharmacist, one becomes aware of the immense gap between the potential and the actual performance of pharmacy as a health profession. For some pharmacists, this is a fleeting cognizance with a significance so troubling that it is denied and buried forever. Other common reactions include resignation, frustration, cynicism, and escape. The most constructive response is dedication to reform of the profession, in whatever sphere of influence a pharmacist has.
A spirit of reform shaped the essays in this book, which were first published as editorials in the American Journal of Health-System Pharmacy (AJHP). The editorials selected for this book—half of them written in 1990s, the rest earlier—are still relevant to the state of pharmacy today. In some cases, the essays offer historical perspective on particular choices the profession has made, such as the adoption of PharmD degree education as the minimum for all new practitioners.

The hope is that this book will attract and arouse new readers—the practitioners, educators, residents, and students who have not been exposed to the pharmacy literature of the past—and incite them to make pharmacy a better profession.

William A. Zellmer is President of Pharmacy Foresight Consulting, where he provides insights on strategic and professional issues in pharmacy practice and education, reflecting a career-long interest in advancing pharmacy as a vital health profession. He is a Contributing Editor of the American Journal of Health-System Pharmacy (AJHP). After having served as Editor of the first five editions of the ASHP Research and Education Foundation’s annual Pharmacy Forecast, he now is an advisor to that project. He is also President of the American Institute of the History of Pharmacy, an elected volunteer position. Mr. Zellmer is a native of Wisconsin and a pharmacy graduate of the University of Wisconsin–Madison. He holds a Master’s degree in Public Health from The Johns Hopkins University.

Mr. Zellmer served nearly 40 years on the staff of ASHP in various capacities, including Deputy Executive Vice President and, earlier, as Editor of AJHP. Some of Bill’s AJHP editorials were compiled in this book, The Conscience of a Pharmacist: Essays on Vision and Leadership for a Profession. He co-edited a book of essays by pharmacists entitled Nourishing the Soul of Pharmacy: Stories of Reflection.